All Dutch rolling stock available at this time

The "Materieel 1946 ELD4" EMU class of the Dutch Railways was a class of streamlined EMU's which was, as the name suggests, delivered around 1946, just after the end of the Second World War. The series was delivered with both two part and four part EMU's. In Dutch Classics 11 you find the virtual representation of the four part EMU's in high detail.

In the real world only one EMU of the two part (ELD2) trainsets was saved to be displayed in the Dutch Railway Museum; of the four part EMU trainsets, unfortunately not a single EMU was saved from demolishment. The EMU series were the first new trainsets after the Second World War. The EMU class was a follow up to the earlier EMU series Materieel 1936 and Materieel 1940. The trainset of Materieel 1946 share a number of details with them.

With this add on we move a little further back in time than with most other Dutch Classics add ons. "Materieel 1946", as this two part EMU series was called, was the first new type of streamlined electric EMU's after the end of the second world war. As the name suggests, the first types were introduced on the Dutch railway network in 1946. With its rounded nose shape it had a characteristic and beautiful appearance, although in last years of its active service, lack of active maintenance had its impact on the EMU's. During that time they were not so popular with Dutch engine drivers, because of the cramped cabin with not so comfortable seating and the limited collision protection compared to the other EMU types, such as Materieel 1954. The EMU's were in service between 1946 and 1983. They were developed after their predecessors, Materieel 1936 and Materieel 1940, which featured the same nose, but with a different composition and interior, so that they were considerably different from the older types of EMU's. In this add on you find the two part of the Materieel 1946 EMU's. 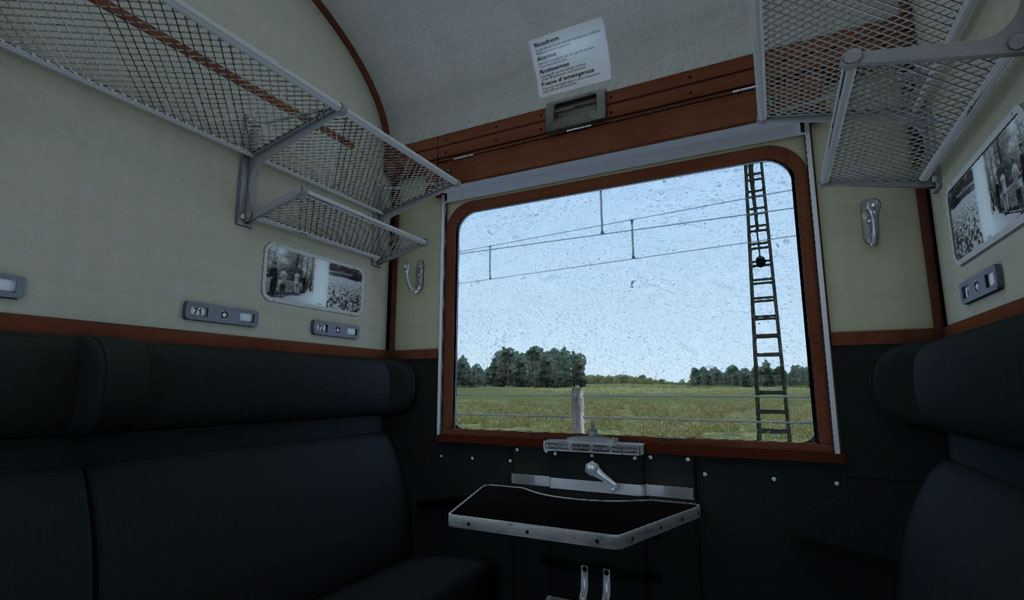 We consided this add on to be a special one. It contains a very detailed series of passenger coaches of the Plan D 7800 series (3rd and 2nd class) that were in service for the Dutch Railways in the second half of the 20th century. The virtual version of these coaches that were already available in Dutch Classics 2 and Megapack 1 has almost completely been redeveloped in more detail than we ever did before. Both the exterior and interior of the coaches has been recreated in high detail and in all versions that these coaches were active in.

Make virtual trips with the so called ´dog head´... in this add on you find the first part of the EMU series with the Dutch name ´Materieel 1954´, which we recreated s in high detail for Train Simulator. This type of EMU was in service on long distance domestic intercity and express train connections, for example between Amsterdam and the cities of Zwolle/Groningen/Leeuwarden in the north and east of The Netherlands. The EMU's were combined for different destinations with consists up to 14 carriages. Because of its high weight the EMU's were famous for their comfortable way of driving and they were a very good way to make long distance domestic travels.

In the real world, this engine can only be seen in the museum, but on your virtual railways you can let this engine come to life again: the engine series 1100 of the Dutch Railways. The 1100 series was built and put into service from the fifties of the twentieth century. Many engines of this well-known type could be seen in The Netherlands in the second half of the last century. The engine was active in a large number of train services from freight trains to express passenger trains. The engine was built after French design, with which the first version of the engine shared a number of features, such as the decoration lining on the sides of the engine.

The Dutch Classics Megapack 1 contains all the rolling stock from the add ons Dutch Classics 1 and 2. You find the complete Plan D class passenger coaches first/second class, the Plan D dining cars and the so called 'Bolkop' coaches (named as such for their rounded front and back). The Plan C class mail coaches, based on similar design as the passenger coaches and the Plan K class of combined first class and second class coaches in all editions can be found in this add on. The coaches were meant for express trains in both domestic and international services.

Dutch Classics 2 is a nice addition to Dutch Classics 1 and contains a series of historic Dutch passenger, diner and mail coaches. Of the Plan D class coaches this add on contains the nine-window B/C (second class/third class) coaches and the dining cars. The "Plan K" class is the combined first and second class coach that is included in this add on. The "Plan C" mail coaches that were built after the same design are also represented in this add on.

Our first add on for Train Simulator contains a part of the Plan D and Bolkop passenger coach series which have been in service for the Dutch Railways in domestic and international express trains in the second half of the twentieth century. The coach series combine very well with the coaches from Dutch Classics 2 and the much more detailed coaches from Dutch Classics 7. The Plan D and Bolkop class coaches were beautiful coaches with their - for that time / very modern rounded shape, with their recognizable shape they were real classics. They have been in service from the middle of the twentieth century and can still be seen in some Dutch railway museums. The coaches played an important role in domestic and international express trains.

An instruction manual informs you about the background and history of the coaches; also you find detailed instructions about installation and use of the coaches. An extensive catalogue that shows all types of rolling stock in this add on is also included.

The first release of this year will be the long expected update of the NS 1300 engine. Finally it will be ready. It will be released at the end of February 2023. We are working hard to get everything ready for that. Especially the scripting will be the last big challenge before we can release the update. We keep you informed about the progress of the project in the coming weeks!

On behalf of Dutch Classics I wish you a happy, successful and healthy 2023! This year we will do our best again to bring the beautiful classic trains that once could be found in The Netherlands in the past, to Train Simulator. The past year has been a very busy year. Because of projects outside the world of Train Simulation we needed to put the development of rolling stock for Train Simulator on hold for some time. In the new year we plan to continue the development of beautiful virtual trains for your virtual railways. Also, the web shop will be renewed. We will offer more payment methods and we introduce a new way to handle all emails we receive every week. From now on we will respond to all questions within no more than 24 hours.